After a friday at work, I took the subway home to have a nights rest before the weekend I intended to spend hacking on the defcon qualifier challenges. I got home and jumped on my laptop – the competition started at 8pm NYC time thanks to timezone differences, so thought I’d see what was likely to be lined up in terms of challenges.

Logging into the legitBS site, I noticed a few Baby’s First challenges available, so I clicked through each having a look at what they might entail. The last was named xkcd, and being a fan of the comic I took a look.

So, the challenge likely has something to do with reading memory. I decided to take quick look at the binary to see what might be involved, and a while later I’d solved it.

First off, I ran file on the binary to see what it likely was:

Much to my happiness, not some less-common architecture or highly packed binary. Not even stripped. I decided to take a peek in IDA..

The program was very small, with only a few basic blocks in the main function. 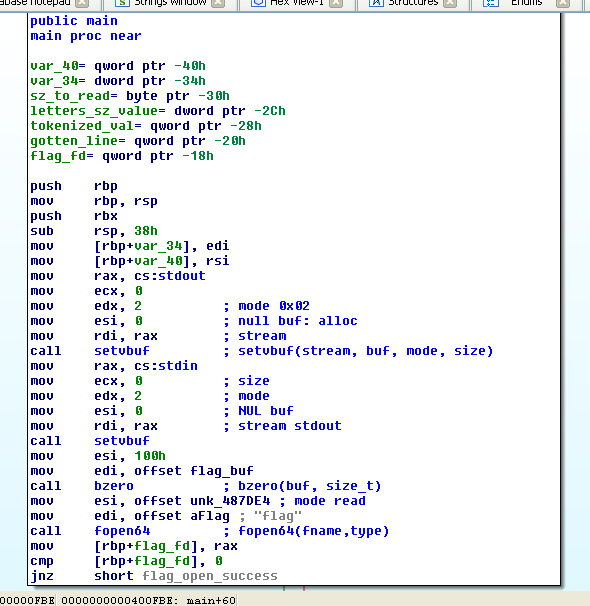 In the above block of code we call setvbuf() for stdout and stdin, call bzero() on a buffer which points to a location in which we eventually read our flag (annotated here as ‘flag_buf’) to clear the memory, and then open a file whose name is ‘flag’. In the last line we test whether the open was a success or not.

I followed along to see what happens with the opened flag file.

If the fopen64() call succeeds, 0x100 bytes (256) is read from the ‘flag’ file into the .bss segment buffer pointed to by flag_buf. Nothing interesting happens if the fopen64() of the flag file fails.

Following the fread(), we drop into this block:

The first call is to fgetln() which reads data from stdin, with a pointer to the read data returning in the rax register. This is fed into strtok() to grab the first token leading up to the ‘?’ character.

A call to a function which (I confess I didn’t look at but made too much sense) looked like strcmp() checked that the first token from fgetln() matched “SERVER, ARE YOU STILL THERE”. If it’s not, we exit.

This is where I remembered the XKCD comic (https://xkcd.com/1354/). The comic repeatedly uses the following string to demonstrate a request to a remote server:

On to the next block of code: 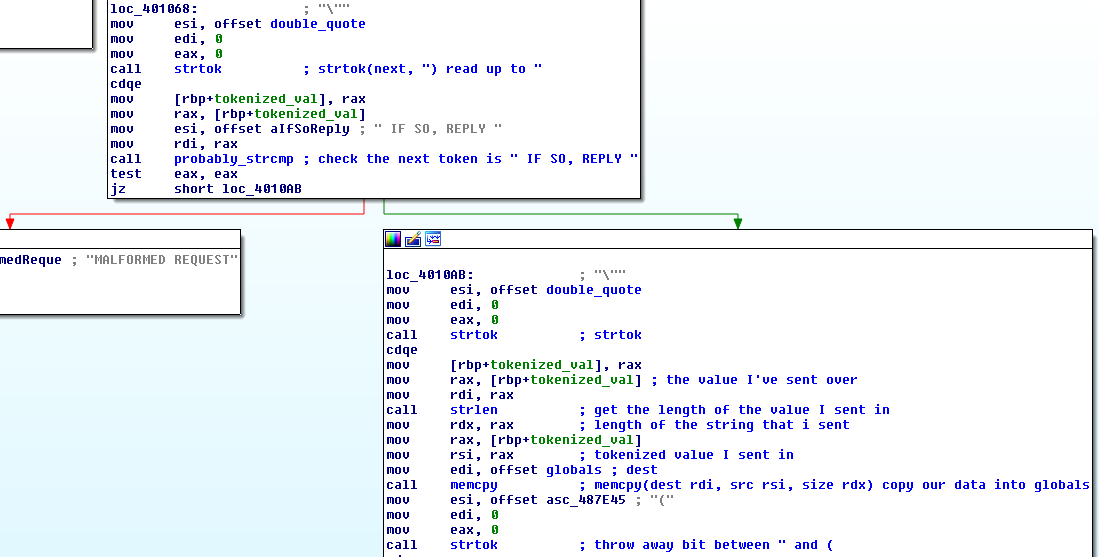 Here, we perform another strtok(), sending in NULL as the buffer pointer, signifying we’re continuing along the string, but this time looking for a ” character as the end of token.

We strcmp() this against ” IF SO, REPLY “, which perfectly matches our xkcd cartoon. Again, if this string doesn’t match, the program sends back an error message (MALFORMED REQUEST) and bails out.

The program performs another strtok(), this time collecting all the data leading up to the ” character again. A pointer to this token string is put on the stack and we also run a strlen() across it to see how long it is.

The next call is to memcpy(), and we’re copying the tokenized string that existed between the two ” characters into a global buffer known in this binary as ‘globals’. The length we memcpy() is taken from the previous strlen.

The next call out is to strtok() again, this time we’re grabbing the string that exists leading up to the ( character. As you’ll see in the final screenshot, that string is discarded – we’re just moving along. 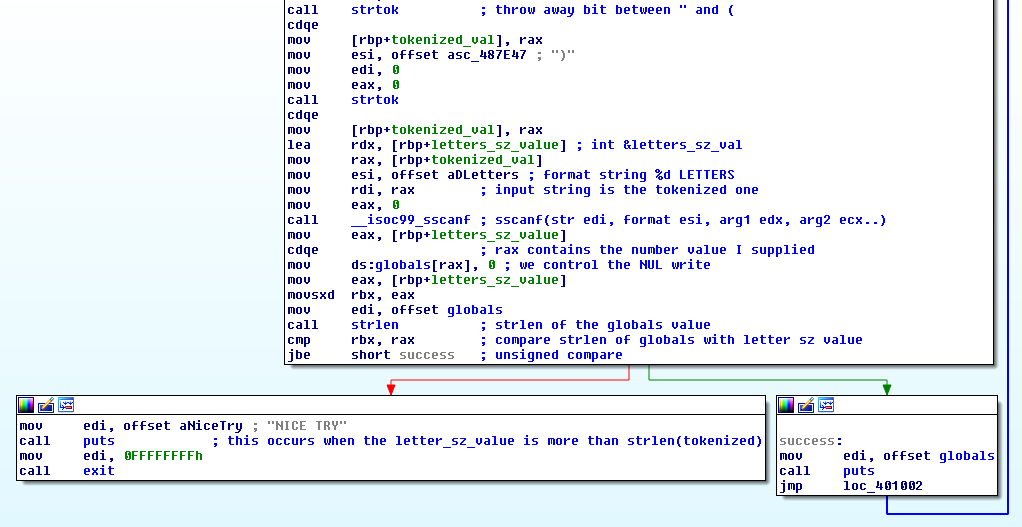 The subsequent strtok() call reads everything up until a ) character is encountered. The call following this is to __isoc99_sscanf(), which is using our token value as input, a scanf string of ‘%d LETTERS’ as a format specifier, and a single pointer into our stack frame as the destination of integer read specified in the format string.

Or more simply, we’re grabbing the 6 from (6 LETTERS) as per the xkcd cartoon.

Whatever number value we send in as the LETTERS variable is then used to pop a NULL into the globals buffer to terminate the string.

At this point I start testing against the remote hostname we were given, sending the following payloads:

Interesting. Being such a small binary mean that the answer was likely pretty straight-forward.

Ok, so in order to hit the puts() call and print out data, we need to ensure the last jump is taken, meaning that the LETTERS value we send in cannot be more than the length of the globals buffer. We control where the NULL is written into the globals buffer, so as long as there are no other NULL values, we can read as long as we want.

The problem is, the buffer has 256 bytes of bzero()’d data. But what lies beyond?

Taking a look in IDA, we see that right after the globals buffer is the ‘flag_buf’ we read in earlier. Excellent.

If we send in enough data to fill up the globals buffer so that it flows directly on to the flag buffer, then request a length via the LETTERS variable that exceeds the data we sent, we should be able to over-read. I tried it using the following python code:

I jumped back on the LegitBS panel and popped it in for the win.